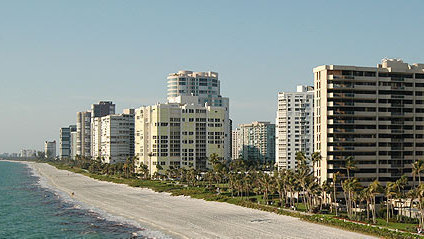 Even after our votes restricted building heights along the shore line to 35 feet, somehow the language in the amendment is being interpreted to allow buildings up to 55 feet in height, and the commissioners aren’t doing their jobs to uphold the 35 foot limit in our voted amendment.

I don’t know about you, but one of the reasons I chose to relocate to and build in Saint Augustine Beach (as opposed to somewhere else in Florida like Boca Raton) was the restricted building height along the shoreline.

Having lived in South Florida for a year, my feeling is that tall hotels and structures along the shoreline are a major eyesore. Your views of the beach from A1A will ultimately be limited to the “cracks” between these towering structures. Beach access will also suffer. With structures like these in place, our shoreline will lose its charm and will ultimately attract less people, not more.

Here are our commissioners: http://www.staugbch.com/boards/commission

Both Commissioner Undine George (who was kind and proactive enough to bring this to our attention) and Vice Mayor Rich O’Brien are equally surprised and upset about this, both disagreeing with the interpretation of the inserted language.

As for the other commissioners (Mayor Andrea Samuels, Commissioner Margaret England, and Commissioner Gary Snodgrass), the only vote they should have is a vote of no confidence.

Because they are not upholding the amendment we, the people, voted into law.

As far as I am concerned, this will be the last term for the three of them. Please sign and share this petition if you agree.

An email from From City Commissioner Undine George, which brought my and my neighbors’ attention to this matter:

Dear Friends: I try not to interrupt your busy inboxes with too many emails. But at last nights meeting we dealt with an issue which I am sure is very important to all of you: building heights increasing to fifty five feet.

You may ask yourselves, “how could this happen after we voted to restrict building heights to 35 feet?”

Although our citizens worked diligently on crafting language for the charter amendment which would impose a height limit, an ocean front hotel developer argues certain inserted language justifies an additional eighteen feet of height for certain ocean front properties. City staff agreed and recommended approval of their plans. This interpretation, however, could be applied to over one hundred ocean front parcels in our city – blocking the views and breeze from the westerly lots. Although as an attorney, I disagree with their interpretation, the citizen who had appealed this interpretation withdrew his appeal last night, during the meeting. The withdrawal of the appeal therefore prevents the Commission from correcting this major mistake in the interpretation and implementation of our city charter and building code by the Building Department and the Planning Zoning Board.

We will now have a hotel at the north side of our city that is fifty five feet high in overall structural height. Worse, it will be the first building you see as you come around the natural scenic bend in A1A Beach Blvd, as it passes through the Anastasia State Park into our city. The good side of this is that it will be a high-end hotel, the owners have a stellar reputation for quality and aesthetics. Surely, it will enhance our city in many ways.

Still, this is a wake up call. Clarifying policies and ordinances can be passed to prevent this happening in the future. This should not be delayed.

I am only one Commissioner among five. Some of my colleagues on the Commission were equally as stunned as I was to learn that our staff had allowed an overall structure size of fifty five feet in the face of the voters. However, we have many issues to deal with on the Commission and sometimes important issues get put on the back burner. Please let the entire Commission know whether this is a priority to you which should not be delayed or ignored. Please send your comments to the city at: